An ongoing 3D scanning project developed in collaboration with the Drawing Matter team. 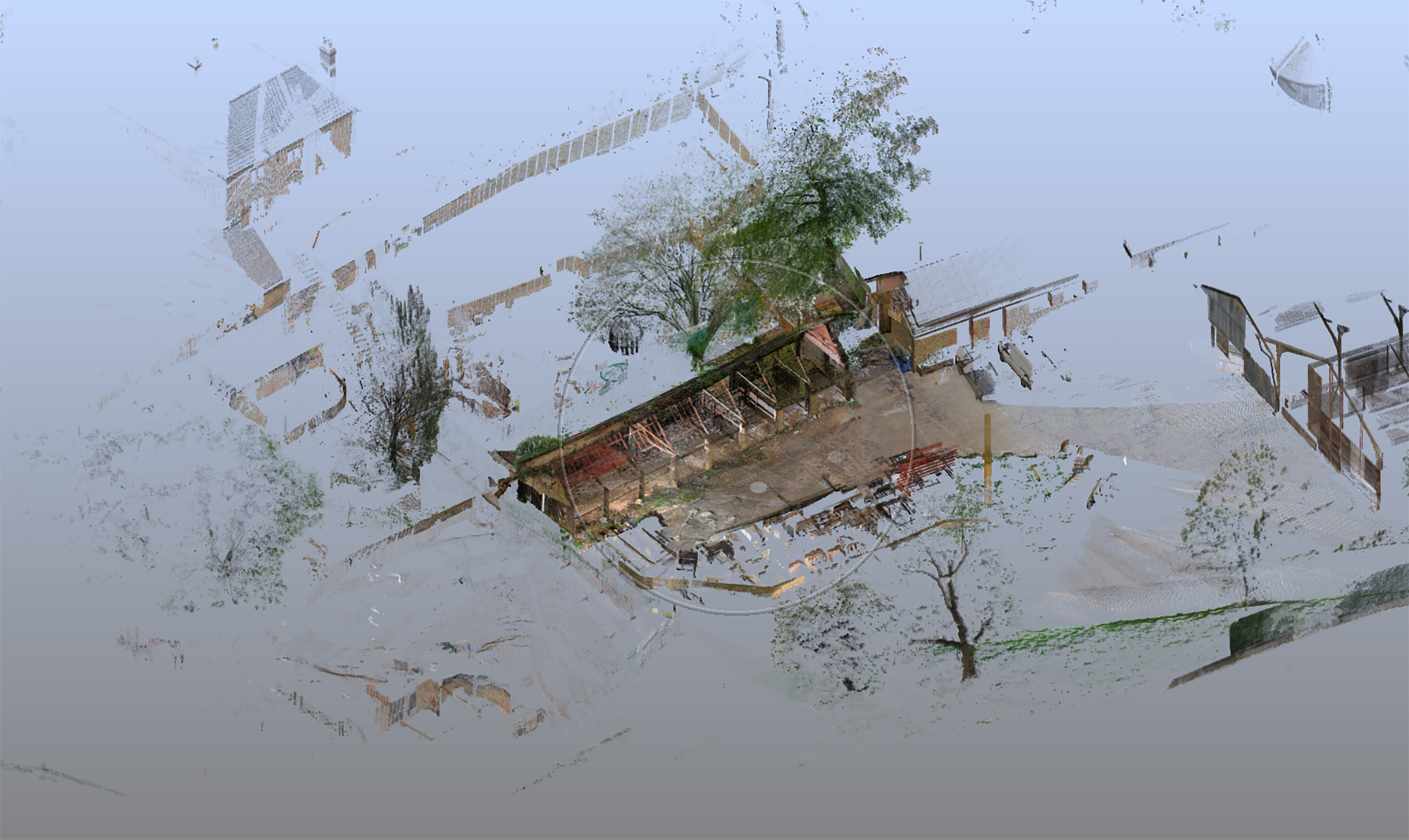 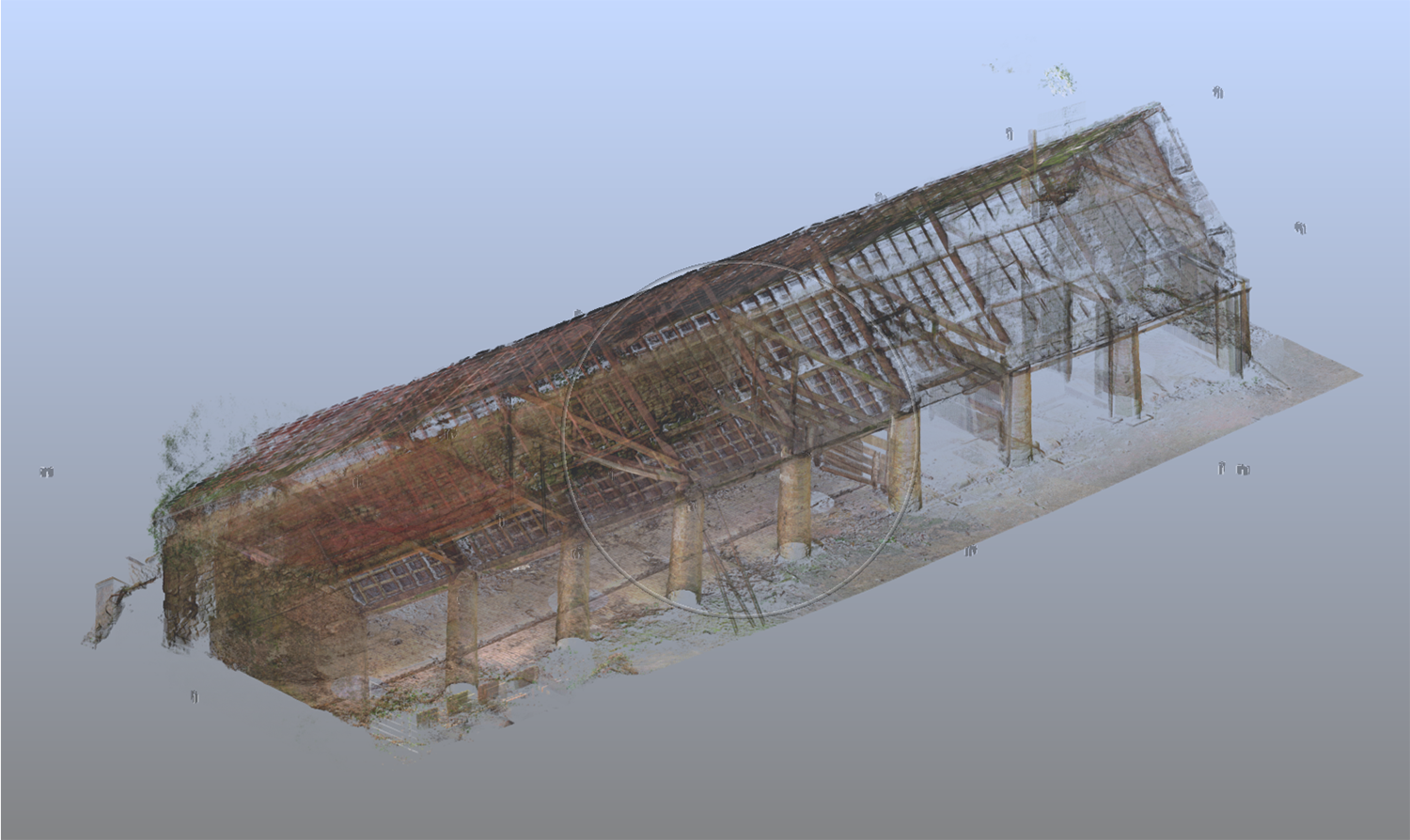 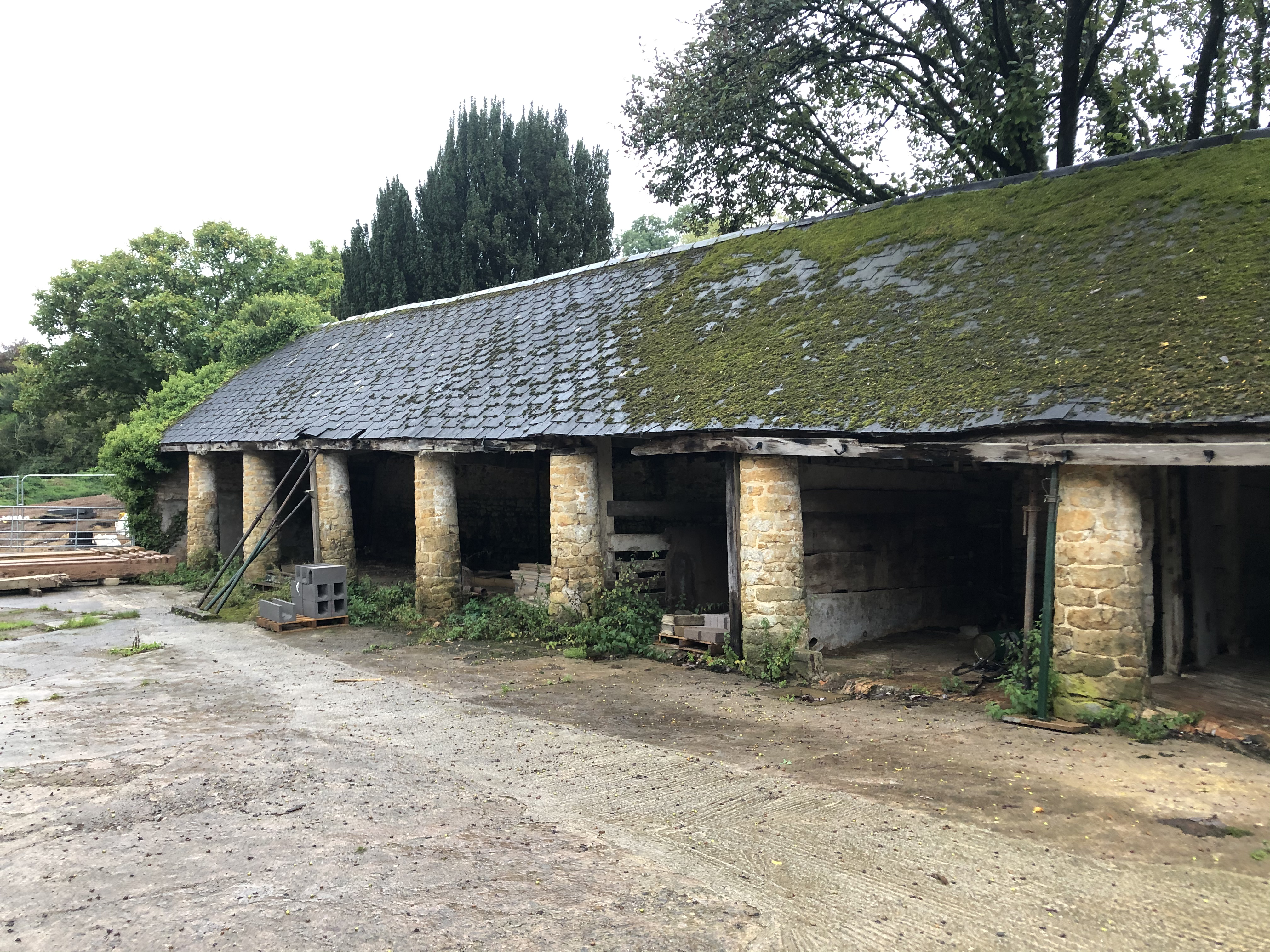 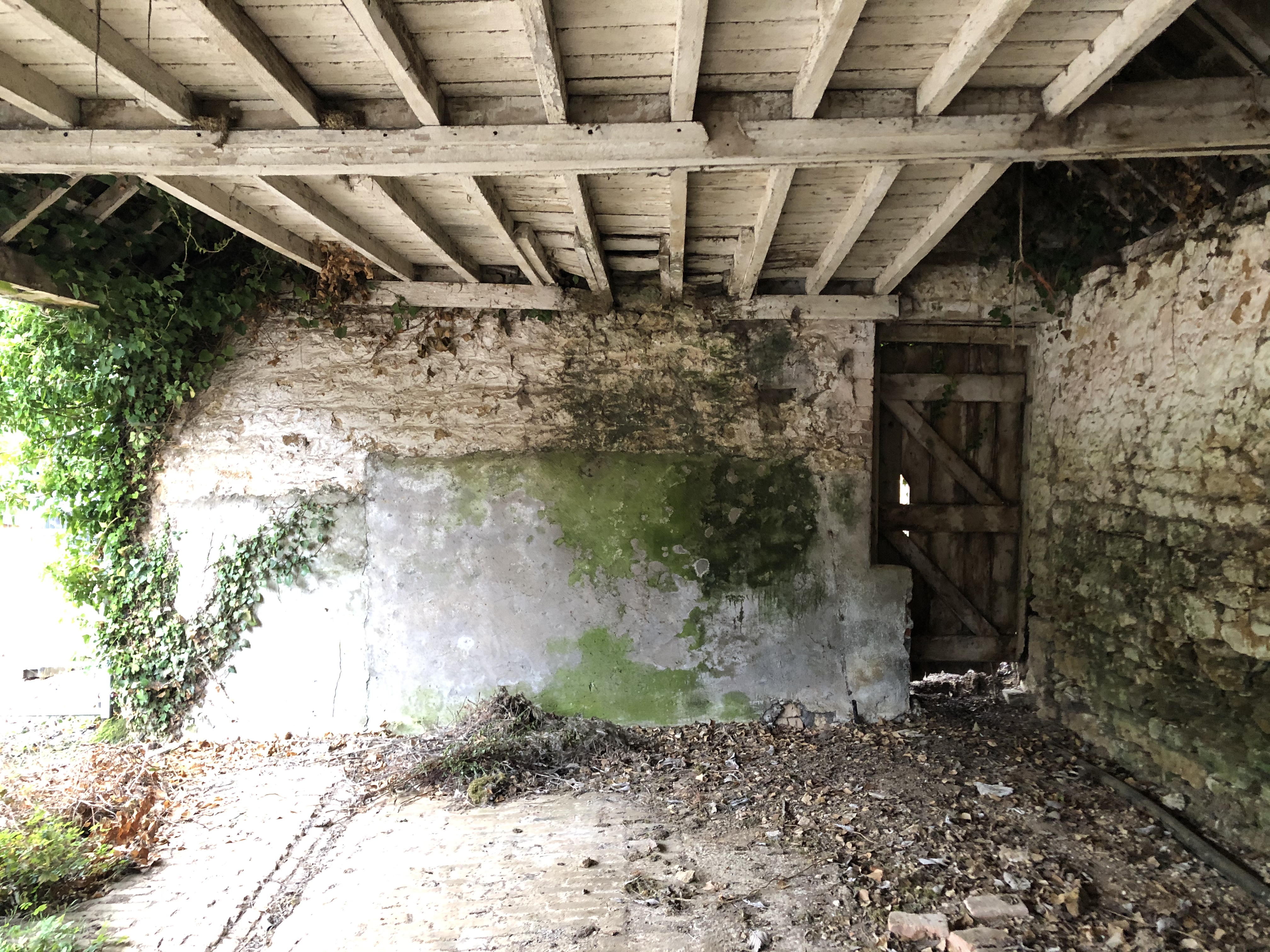 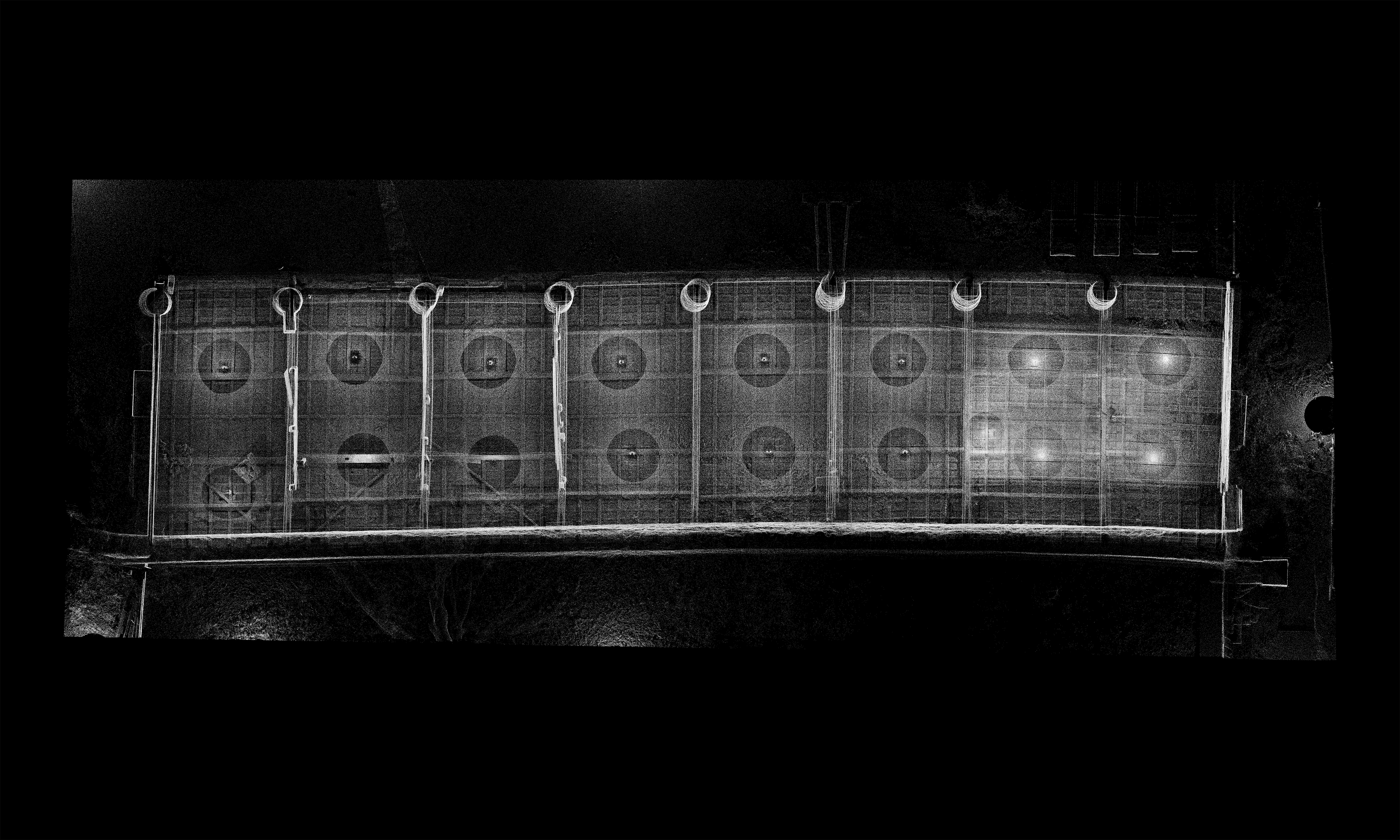 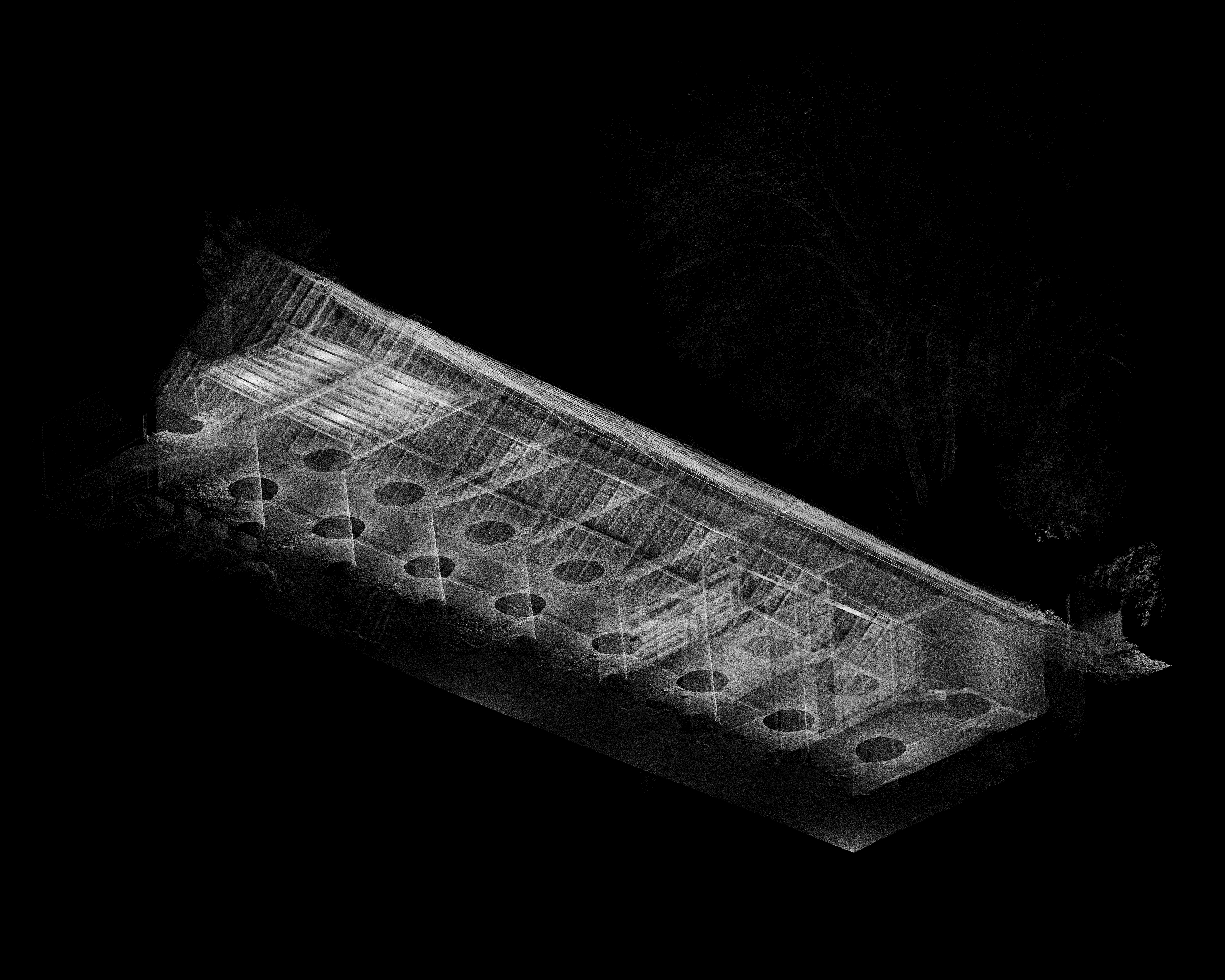 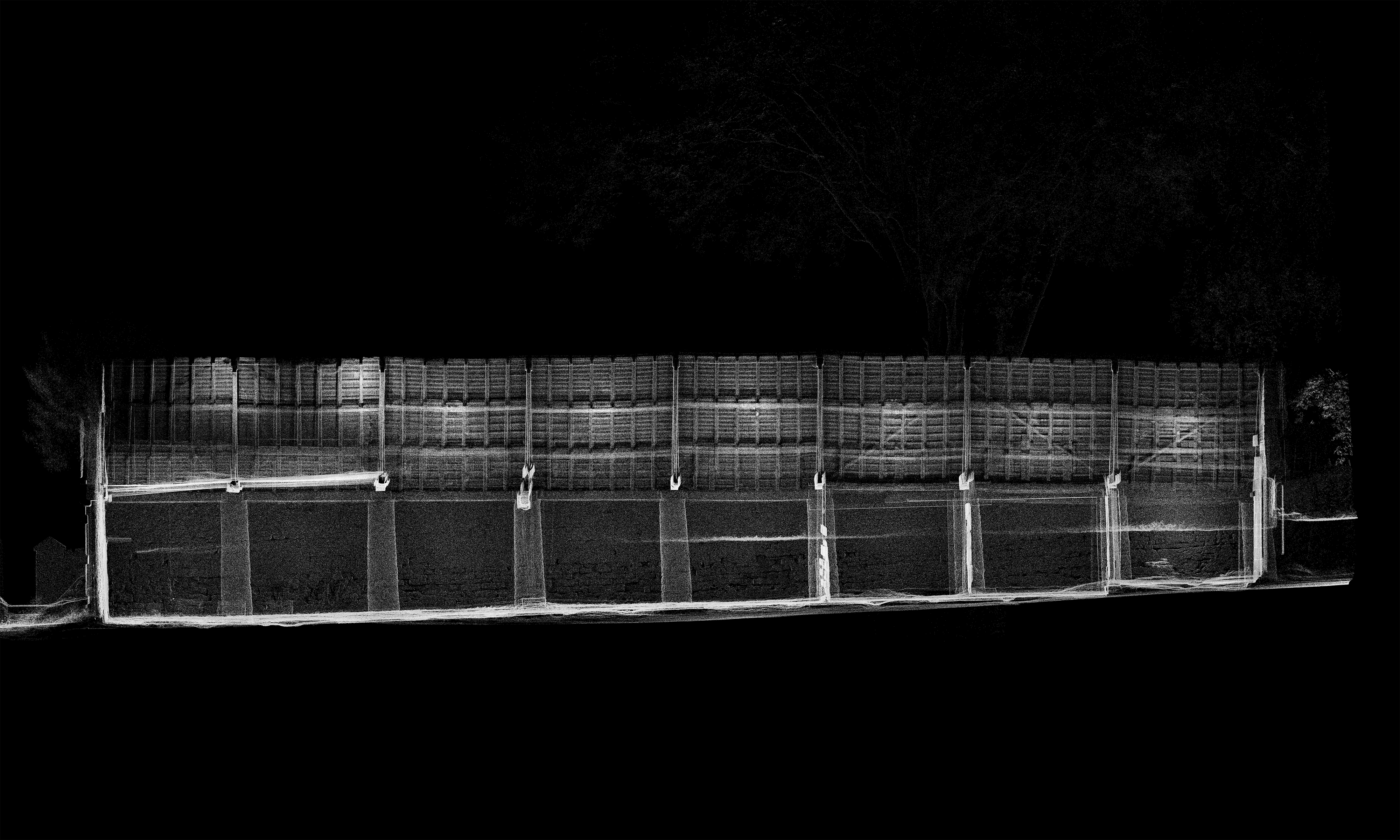 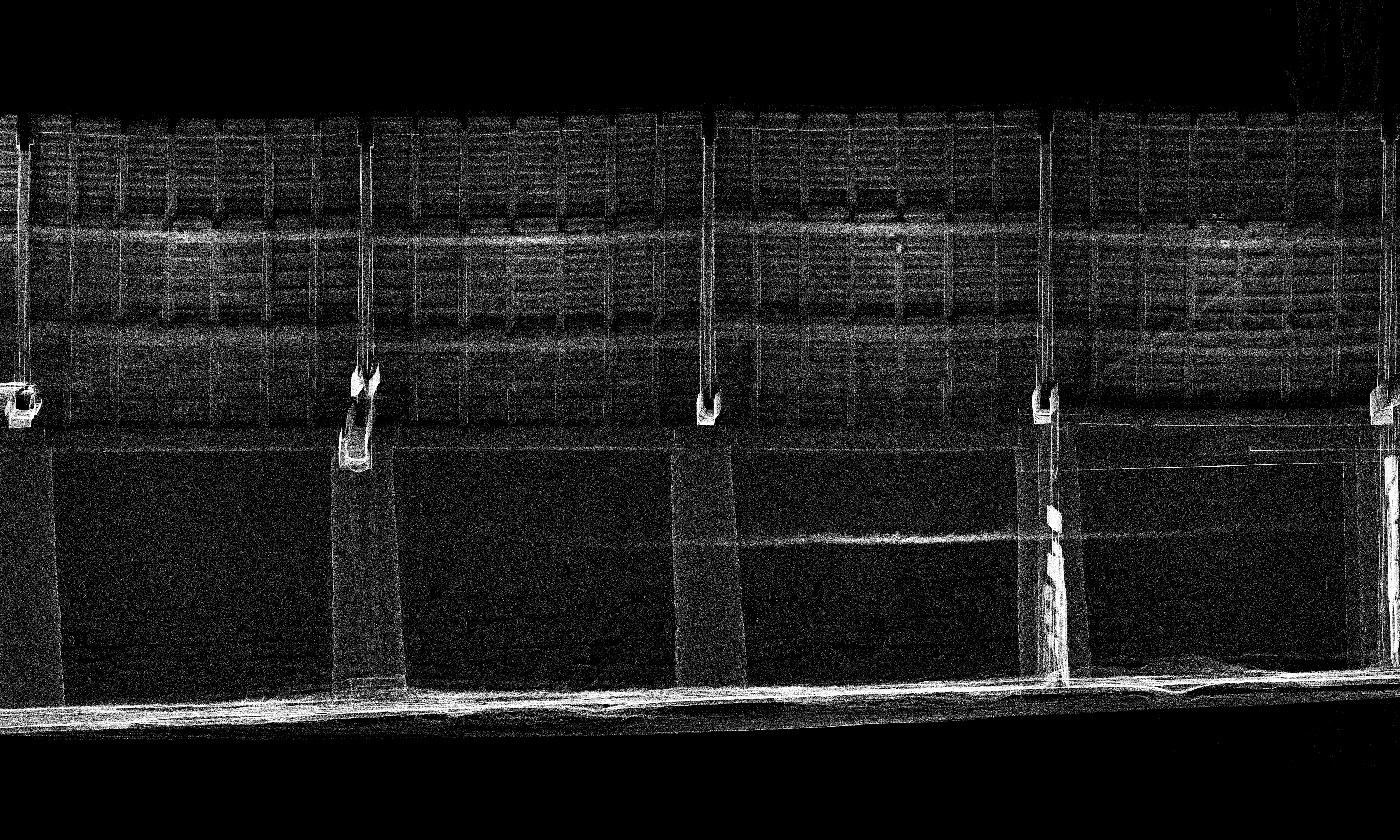 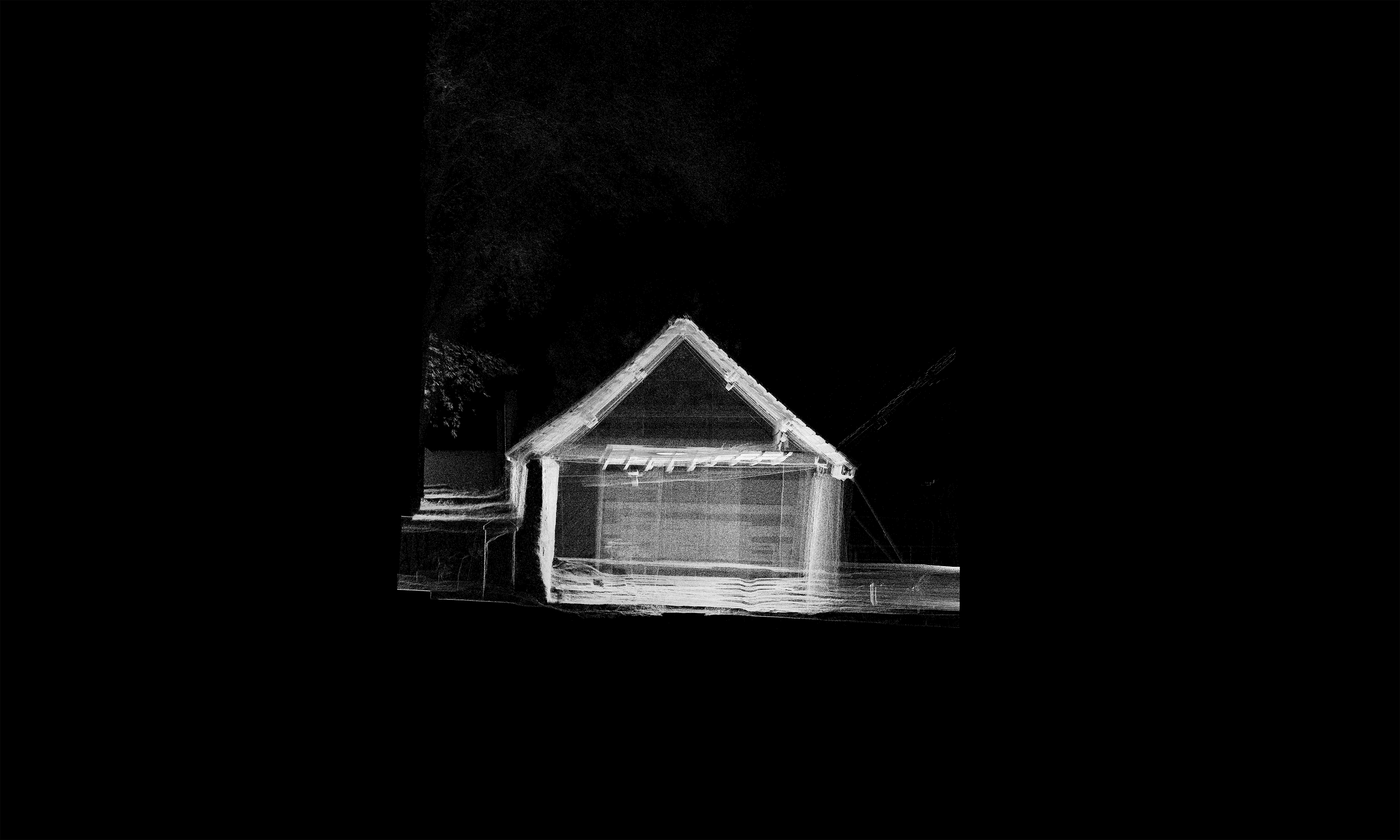 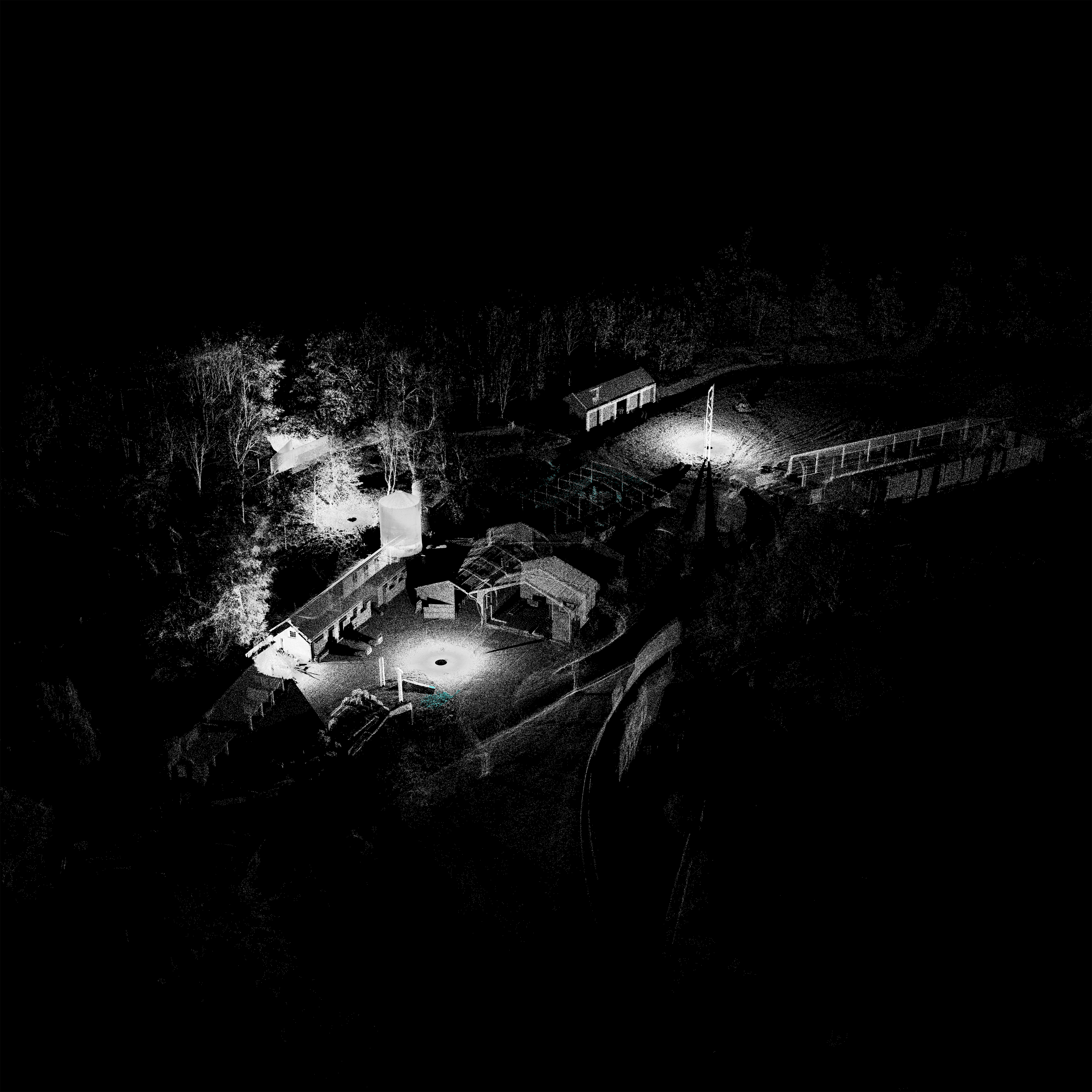 In 2020 we set out to 3D scan and analyse an exquisite old barn at Shatwell Farm. While plans were hatched for the project’s future, these scans provided data for us to analyse how the building has moved during its life as well as to produce imagery. The text below was written by project collaborator Lucas Wilson for a write up which appears here.

Images from this project have been reproduced in Architecture Iconographies: Survey by Matthew Wells

Every image you see on your screen is known as a raster image. Every image is made up of millions of squares of colour, or pixels. Each file has a particular size, height and width, and within that frame, each pixel has a particular size, colour, intensity and location in two-dimensional space (an x and y coordinate). For example, the screen I’m using to write this measures 286 x 180 mm, and its resolution is 2560 x 1600 pixels. The size of an individual pixel is around 0.1118mm2. All that means in the real word is that even if I look very closely at my screen, I can’t see a single pixel.

But the virtual is so fast becoming indistinguishable from the real that soon the resolution of screens will no longer be relevant. Now fully functioning buildings are constructed on the cloud before they are messily recreated with the real-life pixels of bricks and mortar. But another technology, Lidar scanning (light detection and ranging, as opposed to radar, radio detection and ranging), allows the reverse to happen by surveying or digitally mapping existing buildings, and then rebuilding them stone-by-stone in the virtual world.

Place a Lidar scanner in a space and it will fire off pulses of light, measuring the time it takes the light to bounce back. Because light travels at a constant speed, the scanner can calculate the distance to the nearest object in a particular direction. Sending out thousands of pulses per second and recording the distance and the vector (the direction in which the pulse travels) creates a three-dimensional ‘cloud’ of points that gives an impression of the objects around the scanner. Where the digital camera records a raster image (via pixels with x and y coordinates), resulting in a two-dimensional image on your screen, files generated from the scanner (via the point cloud) have not only x and y coordinates, but a third – z coordinate – creating a three-dimensional realm (or world?) within the screen. What’s more, the scanner can use a digital camera sensor to assign each of these points an intensity and a colour.

A high-tech approach like lidar scanning may seem like an unconventional survey method to bring to Drawing Matter’s home at Shatwell Farm, a site that is constantly evolving with temporary and mixed-use spaces. But we were interested in learning whether this new technology could help the types of small-scale projects that are the reality for most builders and architects. The costs of the technology are decreasing rapidly but very few companies are able to implement its use in regular operations. For centuries, builders have invented ways of reducing their reliance on measurements, and even today it is difficult to persuade them that digitally enhanced, super-accurate measuring and time-consuming 3D-modelling is worthwhile. What is for certain is that the visual material that can be pulled out of the scans; part cut through drawing, part photograph, part render, are fascinating.

The images you are looking at offer a detailed survey of one of the buildings at Shatwell Farm. ‘The Barton’ was built around 1840 as a milking parlour, and it is amazingly grand for an agricultural building, with stone columns that run along its front edge. Modern mechanised farming rendered the barn obsolete in the 1960s, and it became a dumping ground and timber store for the estate it served. Over the years the barn has taken on a kind of liquid nature, slumping forwards as water that runs down the hillside behind exerts pressure on its back wall. The roof, with its missing tiles and rotting timbers, has seen better days. And for as long as I can remember the only thing that seems to keep the whole building from collapsing has been a pair of acrow props that lean casually on one of the columns.

Late last year we made a record of the barn, before embarking on a series of projects to halt its collapse. Part experiment, part record, part survey, a 3D scan quickly captured the whole building and much of the surrounding site. We took 30 individual scans, placing the Lidar scanner at different locations around the building. These were then stitched together to form a comprehensive 3D point cloud, resulting in a super-accurate digital representation that can be navigated and inspected from infinite viewpoints. Taking images from these scans is simple, like photographing a whole site from your desk without having to worry about the light. But in transferring 3D information (points) into 2D information (pixels), photography becomes a philosophical idea. What’s happening is something akin to photography but not quite. They are raster images, but when each coloured pixel in a frame represents a digital point in 3D space, captured by another imaging device, then it forces a revaluation of the terminology if not the medium.